Fellow poet Mare Leonard invited me to share a poem for her newly instituted Poetry Corner of Sanctuary Magazine. I was honored and delighted to contribute to this new space where in Mare’s words, one can “share a taste of poems that will make you think, laugh or wonder.” I share her concern about the readership of poetry and highly recommend catching her reading in the Hudson Valley in the near future.

The poem published is from my unpublished full-length manuscript, Hugh Melody and other poems.

In late 2016 I had a poem, a short haiku, published by Philip X. Levine in the monthly Hudson Valley periodical, “Chronogram.” This year, I have the honor of another of my poems (“Older Male Friends”) published by this same supportive editor in the August 2018 issue of the magazine. The poem, along with Levine’s other selections, can be read here online, and the entirety of the magazine can be perused here on Issuu.

This is an unrelated picture of Keanu Reeves, who is my spirit animal.

I am very pleased to announce that last month the Journal of the Poetry Center of San Jose published a poem of mine (“Hugh Melody : I”) in the print copy of their annual publication Caesura. The online version can be read here but it is of a different form than the print version, with all-new authors and differing selections. If you would like to order a copy with me, send me a message and I will try and procure you one at a discount.

It’s a slim and colorful volume from FSG that contains the insightful and wise words of the Adelphi publisher and multi-varied scholar Roberto Calasso on the very art he has exercised for near fifty years. To have this translated work, The Art of the Publisher, available to an English speaking audience and to those within such a collective who take an interest or make investments in the design & production of the vehicles we know as books, is quite a modest though stimulating event for our culture at the near-end of 2015.

Here you can read a short excerpt from this new book.

Calasso’s manner of stating the very nature of the presentation and the substance of a publisher’s duty to quality and value (“that the publisher enjoys reading the books he publishes”) reminds one of an old path that is cut through with such simple, precise words. They reveal beneath our overgrown, commodified brush of books a way once trod on by the few who found it necessary to guide readers on an aesthetic journey – rather than a brief, sensory delight. As he writes, the public can be invited along on an “editorial program” which envisions each book as a chapter in a much greater tome.

I’ve written elsewhere about a publishing enterprise in America similar to Adelphi in its scope and variety. If there is something close to it now, it might be found in FSG or New Directions and the growing catalog of works joined together by these publishers’ visions for a “literary civilization”. But perhaps, in the wake of Calasso’s book or the waning of modern ideas about scholarship, there will be or is now emerging new “forms” of approaching the art of publishing as a higher calling toward the outward balance of unity and variety – as we might hope for this to occur, to each one of us, inwardly. 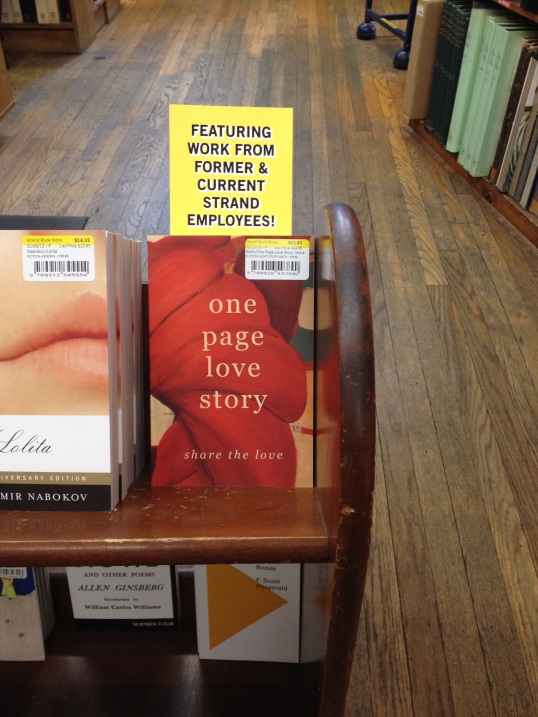 Almost 3 weeks ago, a volume of love stories featured on the year-long, collaborative Tumblr project One Page Love Story was released into the world for purchase on Kindle or in paperback. Affirming the continued existence of physical books, this volume is printed on nice, warm colored stock and has a matte colored cover, as you can see above in one of its new homes for the feast of public eyes, Strand Books! However, this Saturday March 7th and Sunday the 8th are Kindle free days in which you can read and revel in the work that’s been brought together.

The collection of writers involved in this project were prompted by author Rich Walls to participate in the crafting of short fictional love stories of their own composition, submitting one-a-day over a period of 10 days. One Page Love Story: Share the Love is the culmination of these multiple efforts. A portion of the proceeds go to First Book, a charity which “is determined to see that all children, regardless of their economic conditions, can achieve more in school and in life through access to an ongoing supply of new books,” and so I encourage Kindle readers to consider purchasing a paperback copy for this sake for themselves or as a gift.

I am quite proud to be amongst a hearty crew of working authors who have chosen to support such a worthy cause and create work in this surprisingly tough constraint & format. Each one manages to illuminate a wavelength in the spectrum of love’s expression within human life. Thank you to Rich for making this all possible and to the many readers, writers and lovers in this world, striving for those peak experiences of consciousness and communion.

In my last three years of composing poetry, a bevel of new expression has given an edge to the language that has appeared beneath my pen. Concluding an exploration of themes of space travel that has reached back into my childhood and moving forward along the horizon line of our possible future in the stars, the above manuscript has been arranged and titled “Hugh Melody & Other Voices.”

I am approaching a number of poetry presses and publisher’s contests in order to find a home for the manuscript while I attend reading series in NYC that might afford an opportunity to test these compositions on an audience. I can be contacted directly if there are interested writers, readers and publishers out there who support emerging poets in finding homes for their work.

A selection of poems have been recited and recorded using Soundcloud and can be heard here for a taste of my style.

Periodic updates on future work, readings or forthcoming publication in journals will be posted here.